In August I did a little solo bike/backpacking trip, to spend a week in the woods and see the eclipse.  Oh my God.  It was the most beautiful time.  Words can't say how I felt, and I think "beautiful" is the best available word to point to.  Here are some photos. 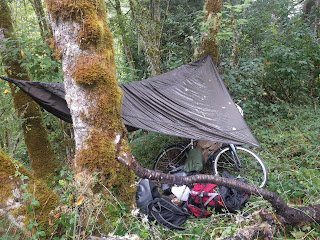 Getting rained on along the Clackamas river. 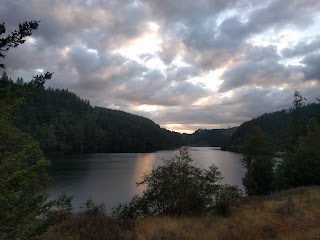 Along the ride into the Cascades.  I took my time getting there, spending this second night on a mountain along the river, and getting to Bagby hot spring in time for the third night.  There I hung out with a group of ten people who had just come from running a kitchen at a camp somewhere, and gave me a bunch of their leftover food, which allowed me to stay in the mountains a full ten days after that without getting hungry.  After Bagby I hiked off-trail to get over to Bull of the Woods without having to do a 20 mile loop or whatever it was on trail.  This was awesome at first, though tiring, but then I hit this super dense rhododendron thicket, and took about four hours to go a tenth of a mile through it, as I kept getting stuck.  But it was passable!  Definitely more passable than a blackberry thicket. 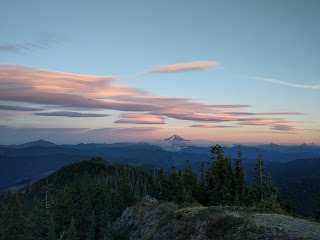 I camped on top of Bull Of The Woods for four nights, and then two more on Big Slide.  Pictures do not do any sort of justice to the 12 sunsets and sunrises on top of the mountains.  Such beauty.  Also saw a lot of meteors, one of which fell slowly at sunset and flared up before going out.  And birds -- there were hawks, one of which landed for a while in a tree just twenty feet from my head.  Hummingbirds, one of which flew straight into my face -- I dodged instinctually, I don't know if it thought I was a flower or what.  Blue birds, and some red birds, and a bunch of other kinds. 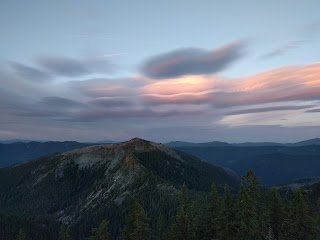 Looking at Big Slide from Bull 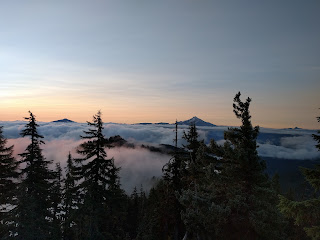 Morning fog rolling in and melting away.  Mt Jefferson in the middle, Olallie Butte on the left, and Three-fingered Jack on the right. 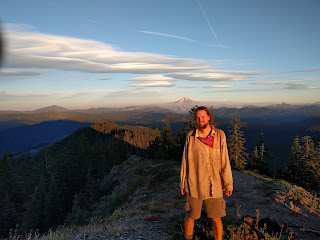 After three days alone on the mountain, some people showed up and took my picture. 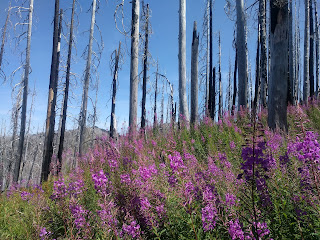 During the day when it got hot up on the mountain tops, I would go down to one of the lakes to swim and get water.  This is the way down to Lake Lenore -- the slope was covered in beautiful fireweed -- apparently so named because it's the first thing to cover the ground after a fire. 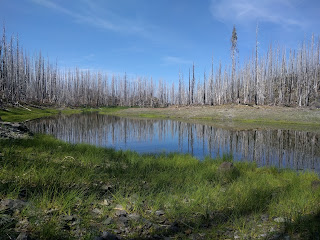 Lenore was incredibly peaceful with no one else around, so I spent all afternoon there picking huckleberries and sitting with my feet in the water.  There were these brown salamanders (actually "Rough Skinned Newts" I think) in the water all around the shore.  Three of them came over and crawled on my feet, one of them kept sticking his face in the cracks between my toes, probably eating the grime or salt or something.  One of them came by all agitated, trying to shake this tiny green worm off his (or her, I dunno) back.  He rolled over and over, scraped his back against rocks and my leg, and tried to reach it with his own short arm/leg, but could not.  I don't know how that ended as he eventually moved away, still trying to get the little guy off. 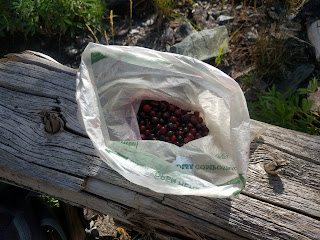 Huckleberries!  The entire wilderness was full of huckleberry plants, though most of them had very little fruit, supposedly it wasn't the best year for them. 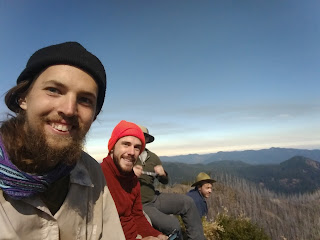 Up on an unnamed peak as the eclipse gets darker.  A lot of people showed up on the mountains the weekend before the eclipse, so I had company.  You probably saw the eclipse or already talked to people who did, and heard about the eerie feeling of the sun dimming for an hour, and the birds starting to chirp.  One beautiful thing here was how the snow-capped peaks to the north were still glowing in the sun while we were in the shadow.

When I was up there during one of the sunsets, some people came up, and one said something about how amazing it was, it looked like heaven.  Said the other: "welcome to the world".  I liked that saying and think I'll use it again if I remember. 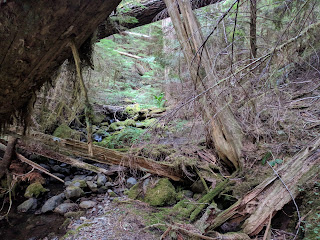 After the eclipse I hiked back to Bagby hot springs where I had stashed my bike.  Bushwhacking the last mile was much easier than the first time, as I went a different route along the creek, and didn't hit the dense rhododendron thicket.  Just a lot of clambering over and under big fallen trees. 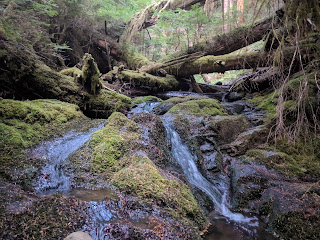 The creek was amazingly beautiful.  Close to this creek the trees had never been logged, so they were huge, and the ground was covered with a deep layer of decaying wood covered in moss.  Very soft and quiet.  I was very grateful that there were very few mosquitoes and no poison oak.  It was a very hospitable place. 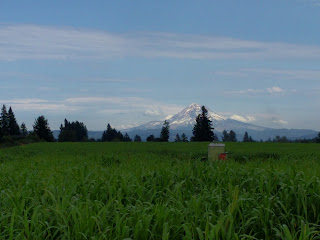 The ride home was beautiful too, it rained a bit and the sky was gorgeous.  When I first encountered a busy intersection, and was crowded by huge noisy vehicles with faceless (well, face-obscured) drivers all in a hurry, my heart was sad.  It doesn't need to be this way.